Orthopedics is the area of medicine concerned with treating injuries to the musculoskeletal system – the various bones, joints, muscles, tendons, and more that allow us to move and function.

Trauma and repetitive strain are among the top reasons patients end up with an orthopedic injury that may require surgery. It’s no surprise, then, that athletes of all stripes – including weekend warriors – occasionally require orthopedic surgery.

More than ever before, many of these procedures are being performed in an outpatient setting, which allows patients to go home on the same day as their procedure, without needing to stay overnight in a hospital. Minimally invasive techniques used in ambulatory surgery centers like The Surgery Center of Chester County also mean patients experience a faster recovery and less post-op pain and scarring than with inpatient procedures.

Common types of orthopedic surgeries performed on an outpatient basis include:

Torn ligaments in the knees are common among athletes or anyone who makes frequent changes in direction, sudden stops, or lands incorrectly from a jump. Most often, it is the anterior cruciate ligament (ACL) that is damaged.

ACL reconstruction surgery involves removing the damaged ligament (which connects one bone to another), and replacing it – often with tendon graft, either from another part of the knee or from a deceased donor.

Doctors and patients alike prefer this minimally invasive surgical method, because it involves making only the smallest of incisions – about the size of a buttonhole – through which a narrow tube with a lighted, fiber-optic video camera is inserted. Miniature surgical implements are used via the tube, as well.

Arthroscopy is used to remove or repair damaged tissue at a joint. Orthopedic surgeons often use it to simultaneously diagnose and treat a wide variety of issues in the knee and shoulder. For example, when surgery is required for rotator cuff injuries, an arthroscopy is often recommended.

Carpal tunnel syndrome involves compression of a nerve in the wrist, which can cause symptoms such as tingling, pain, and numbness in the hand and arm.

If conservative treatment options fail to relieve a patient’s symptoms, a surgical procedure known as carpal tunnel release may be warranted. There are two ways to surgically relieve the compressed nerve: via a 2-inch incision made at the wrist (an “open” surgical procedure) or by utilizing a smaller incision through which a flexible tube with a camera is inserted to visualize and conduct the surgery.

Any joint in the body may be prone to injury and require surgery. Among the most common joints requiring outpatient orthopedic surgery are the knee, shoulder, hip, and ankle. Degenerative arthritis is the most common reason for joint pain and the need for joint repair or replacement surgery.

In some cases, repair is all that is necessary when the damage is minor or contained within a limited area. In other cases, a partial or full replacement of the joint may be necessary. Minimally invasive arthroscopy is often the surgical method of choice when it comes to joint repair and replacement.

A very common shoulder injury, rotator cuff tears often occur in people who engage in repetitive overheard arm movements. Arthroscopic surgery is the preferred method of repairing rotator cuff tears. During the procedure, your surgeon may trim and remove damaged tissue or any bone spurs that may be present, before reattaching the torn tendon.

* Federal regulations require that we inform you that these physicians have an ownership interest in The Surgery Center of Chester County. 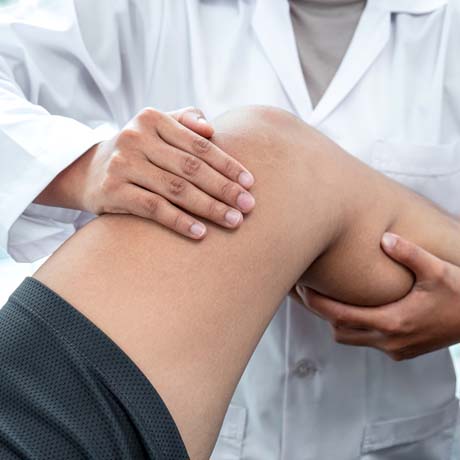 Copyright © · The Surgery Center of Chester County · All Rights Reserved